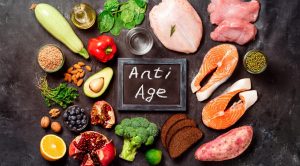 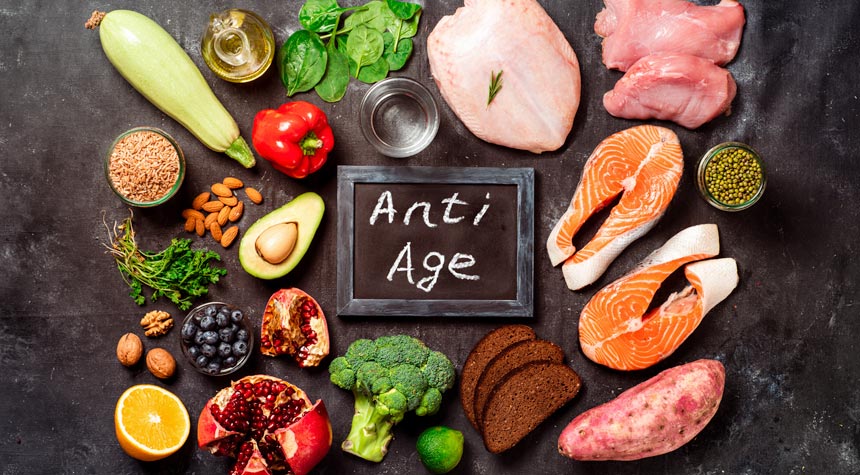 It is said that an apple a day keeps the doctor away, but did you know that apples along with other superfoods can support healthy aging? Nutritionists and health experts say the beverages and foods that we consume on a regular basis can make a difference in our health as we age.

Choosing an eating plan that fills your plate on a weekly—if not daily—basis with superfoods is optimal. Two plans come highly recommended when promoting healthy aging: The Mediterranean and DASH diets. These popular dietary plans meet the approval of nutritionists and dietitians because they contain foods rich in antioxidants, minerals, and vitamins, and have anti-inflammatory properties.

A third eating plan combines the previous two diets to form the MIND (an acronym for Mediterranean-DASH Intervention for Neurodegenerative Delay) diet. The MIND eating plan, created by researchers at Rush University in Chicago, recommends:

What makes MIND different is that the plan includes some unhealthy foods that would be a no-no in other diets. But, it places limitations for the consumption of these foods. For example, MIND suggests:

“MIND is about changing your lifestyle, not following a fad diet,” said Jennifer Ventrelle, the lead dietitian for the MIND Diet Intervention to Prevent Alzheimer’s Disease at Rush. “Because it is a set of guidelines instead of strict rules, the MIND diet allows for special days.”

It’s a fact that the brain changes as people get older, and these natural changes can affect memory, learning, reasoning, and other cognitive functions. Researchers, however, believe anti-aging foods have a positive effect on the brain and provides long-term protection against cognitive decline.

For example, a study conducted by Rush University investigators found that people who closely followed the MIND diet had a 53 percent lower risk of developing Alzheimers’ disease.

Similarly, a new study in the Molecular Nutrition and Food Research journal found that adding more fruits, vegetables, whole grains, and other plant-based foods to one’s diet could help reduce the risk of cognitive decline in the elderly.

The investigators focused on metabolites—the end products of metabolism—and their effect on cognitive impairment. They found that foods like cocoa, coffee, mushrooms, apples, and blueberries had a protective association with brain health. This may be due, in part to fruits, vegetables, whole grains, and other superfoods having powerful antioxidants, called polyphenols.

In contrast, researchers observed metabolites related to unhealthy dietary patterns, such as artificial sweeteners and alcohol, had a damaging role in cognitive health.

Researchers in one study suggest that “abundant dietary intakes” of specific plant-based foods are key in maintaining skin health and function.
The researchers reviewed a number of previously published epidemiological studies. One study observed Japanese women who consumed green and yellow vegetables had fewer wrinkles. Similarly, the Dutch Healthy Diet index guidelines that promote a diet rich in fruits, vegetables, yogurt, and milk were significantly associated with fewer wrinkles in women who adhered to the diet.

Among the foods cited in the study as having benefits on the skin were soy, almonds, and yellow, orange, and red fruits, such as mangos, melons, citrus, and tomatoes.

Vivien Fam, a co-author of the study, published in October 2021 in the Journal of the Academy of Nutrition and Dietetics, said studies that suggest getting 20 percent of one’s calories as almonds (about 1/2 cup of almonds per day) or eating a 1/2 cup of mangos on a regular basis have shown to improve wrinkles in postmenopausal women.

In addition to the skin, healthy diets that include protein can address the loss of muscle mass which occurs in the aging process. For example, a study published in May 2014 in the Journal of Nutrition, found that people who ate about 30 grams of protein at breakfast, lunch, and dinner had 25 percent greater muscle growth, compared with those who ate the same total amount primarily at dinner.

Foods, such as fish, poultry, soy, beans, lentils, and Greek yogurt, are good sources of protein, and these foods are part of the MIND, DASH, and Mediterranean diets, which are low in saturated fat.

“Protein is often not consumed in large enough quantities,” says Heather Keller, a dietitian, and professor in the Schlegel-UW Research Institute for Aging at the University of Waterloo in Ontario. “Older adults appear to need more high-quality protein in their diet to stimulate muscle development and retention.”

Health and nutrition experts emphasize that anti-aging foods can only help if people include these superfoods in their overall diet and lifestyle. In other words, adding a random piece of fruit every now and again into a steady diet of processed meats, baked goods, fast foods, and salty snacks will not make much of a difference.

Experts also caution against falling for claims that a random superfood is the “next best thing” to providing you with better health. It’s the overall diet and lifestyle—not just one food—that assist with healthy aging.

According to Mona Gohara, a dermatologist and associate clinical professor of dermatology at the Yale School of Medicine, “There is no such thing as a quick fix.”