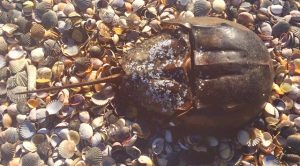 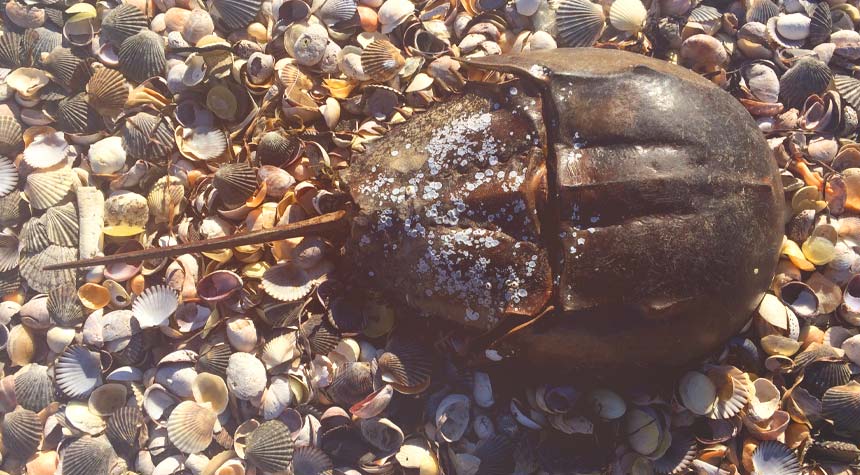 These Denizens of the Deep Keep Vaccines Safe, but Are in Big Trouble

Pharmaceutical companies are racing against time to develop a vaccine for the novel coronavirus disease 2019 (COVID-19), which has devastated lives worldwide.

To test the safety of potential vaccines, researchers have been using a substance from one of the Earth’s oldest creatures—the horseshoe crab. The pharmaceutical industry uses the arthropod’s milky blue blood as a safety standard to ensure that new drugs do not contain bacteria harmful to humans.

While the Atlantic horseshoe crab gets credit for saving thousands of human lives each year, some humans are campaigning to save the invertebrate from becoming an endangered species.

The horseshoe crab, found along the Atlantic coastline from Maine to the Gulf of Mexico, is considered a “living fossil” since the helmet-shaped creature appeared more than 200 million years before the dinosaurs, according to the National Ocean Service.

Thousands of horseshoe crabs are caught each year and brought to labs where some of the blue, copper-based blood is removed from a vein near the heart. The blood is used to produce limulus amebocyte lysate (LAL), a clotting agent that protects the crab from bacteria, fungi, and harmful proteins called endotoxins, which are part of the cell structure of certain bacteria.

Endotoxins that enter into the bloodstream of humans can cause a wide range of serious—and fatal—health problems, including fever, burst blood vessels in the brain, aseptic shock, and death.

For decades, pharmaceutical companies have been using LAL to test for contaminants in drugs, vaccines, and medical devices. LAL will either clot or change color when it detects the presence of dangerous bacterial toxins. The U.S. Food and Drug Administration (FDA) licenses companies to produce the LAL bacterial endotoxin test.

According to John Dubczak, an executive director with Charles River Laboratories, the LAL test has “unequivocally elevated the quality and safety of injectable pharmaceutical drugs and medical devices, and that includes all of the vaccines that protect us.” Dubczak’s company is licensed to produce the LAL test.

Biomedical use of crabs has increased since 2004 but has remained stable in recent years with 464,482 crabs brought to biomedical facilities in 2018, according to a report of the Atlantic States Marine Fisheries Commission’s (ASMFC), which manages the horseshoe crab population.

The crabs are released alive and returned to the water after the blood harvest, as required by the ASMFC, and a portion of the crabs die from the procedure.

About 50,00 crabs die during the blood harvest, according to a 2018 report in The Atlantic. Besides the lab procedure, pollution increased need for bait in the eel and whelk pot fisheries, and loss of habitat due to the rise in sea level are also factors threatening the existence of horseshoe crabs.

Wildlife advocates have been pushing for pharmaceutical companies to use alternatives to the horseshoe crab for biomedical safety tests.

According to Dr. Barbara Brummer, The Nature Conservancy’s director for the state of New Jersey said LAL testing currently involves bleeding about half a million crabs and the impact that withdrawing blood has on the life of the crabs after they are put back into the water is uncertain.

Because horseshoe crabs are a “key part of the eco-system,” Brummer said she is very concerned now that at least 30 companies are working on a COVID-19 vaccine and each potential vaccine has to go through testing.

While pharmaceutical companies have been working on COVID-19 vaccine trials, the FDA has not yet approved or authorized a vaccine for the disease.

Associates of Cape Cod, Inc., (ACC) a pioneer in LAL testing, claims suggestions that biomedical manufacturers are contributing to the decline of the horseshoe crab through LAL testing are misleading.

In a 2018 article published in the American Pharmaceutical Review, the ACC countered that the overall number of horseshoe crabs is stable, the horseshoe crab is not in danger of becoming extinct, and the biomedical industry has a “relatively minor impact” on the death rate in the horseshoe crab population.

Lonza Group, a biotechnology company based in Basel, Switzerland, developed “recombinant Factor C” (rFC), a synthetic alternative to the LAL.

Jay Bolden, a biologist with Eli Lilly, said the company had begun testing a COVID-19 antibody in humans with all the safety testing done with rFC. Bolden told Reuters that there is sufficient scientific evidence, including more than 40,000 samples tested by Lilly so far, to show that rFC is comparable to the horseshoe crab blood.

Earlier this year, the U.S. Pharmacopoeia (USP), which establishes standards for the pharmaceutical industry, had initially planned to include rFC as an option for safety testing. However, the USP changed its mind, saying the organization would instead create a new, stand-alone rFC chapter in May 2022.

Meanwhile, conservationists and wildlife organizations continue to monitor the disappearance of horseshoe crabs along the Atlantic coast. For example, the number of horseshoe crabs are decreasing on beaches in Long Island, NY, said John Tanacredi, director of the Environmental Research and Coastal Oceans Monitoring lab at Molloy College in Rockville Centre, New York.

The lab monitors 115 beaches, and 75 beaches have seen a decline in the number of horseshoe crabs. Tanacredi said horseshoe crabs have been on Earth for 445 million years, but questions whether they can survive the 21st century.