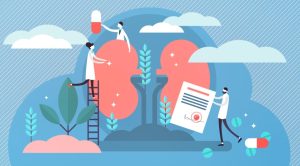 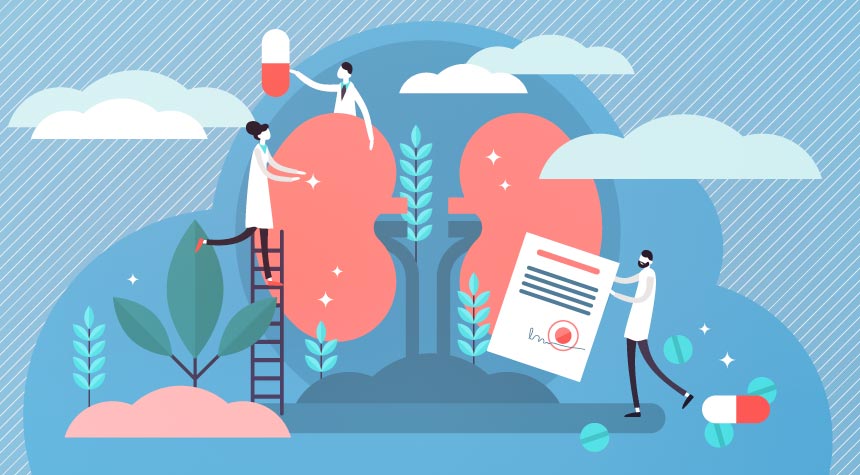 Kidney cancer remains one of the most common cancers affecting both men and women in the United States. Because of this, researchers are studying new ways to treat this devastating disease.

About 79,000 new cases of all types of kidney cancer are expected to be diagnosed in 2022, and 13,920 people will die from this disease, according to the American Cancer Society (ACS). What’s more, the ACS has found that the average age of a kidney cancer diagnosis is 64, with most people being diagnosed between ages 65 and 74.

The rate of new cases has been rising since the 1990s, which is one of the many reasons why numerous clinical trials are underway to find more effective treatments.

One trend in treatment is immunotherapy which enlists the body’s immune system to fight kidney cancer. Typically, the immune system recognizes and fights foreign substances that invade the body. Some cancers, however, can fight against the immune system’s attack. So, medical experts are using drugs called immune checkpoint inhibitors, which boost cells in the immune system so that they recognize cancer cells and destroy them.

“If you think of a tumor’s defense against an immune attack as barbed wire, this class of immunotherapy drugs aims to cover the barbed wire and allow the immune system to do its job,” Dr. David McDermott, a cancer specialist at Beth Israel Deaconess Medical Center in Boston, said in an interview with Time.

Immunotherapy was once the second form of treatment after the main forms of treatment failed to work. Now, because kidney cancer develops quickly, doctors are using immune checkpoint inhibitors as the initial treatment.
Dr. McDermott believes this is the “biggest innovation of the last five years.”

“By giving immunotherapy early, as first-line treatment, more patients are not dying early,” said Dr. McDermott, who is also a professor of medicine at Harvard Medical School.

Researchers are seeing promising results in clinical trials involving Keytruda, an immune checkpoint inhibitor. Keytruda (the brand name for the generic drug, “pembrolizumab”) was approved by the U.S. Food and Drug Administration (FDA) in November 2021 after a clinical trial showed that patients who took Keytruda were significantly more likely to survive and be disease-free two years after surgery compared to trial participants who received a placebo.

Keytruda is used to treat a form of cancer called renal cell carcinoma (RCC), in which cancer cells form in the tubules of the kidney. The drug is approved for patients who are at risk of a recurrence after nephrectomy, the surgical removal of one or both kidneys.

Some medical professionals, including Dr. Walter Stadler, a medical oncologist at the University of Chicago Medical Center, said Keytruda is an important development but one to monitor because the clinical trial improved disease-free survival in some patients but did not improve overall survival.

For example, in 2021, the FDA approved combining Keytruda with Lenvima (the brand name for the generic drug, “lenvatinib”), a prescription targeted therapy medicine used to treat certain kinds of thyroid cancer in addition to kidney cancer. The Keytruda-Lenvima combination was approved for the initial treatment of adult patients with advanced RCC.

Also, in 2021, the FDA approved the combination of Opdivo (nivolumab) and Cabometyx (cabozantinib) as first-line treatment for patients with advanced RCC. Opdivo is a prescription immune checkpoint inhibitor used for patients whose advanced kidney cancer starts growing again after they have received targeted drug treatment. Cabozantinib is used to treat advanced kidney cancer as well as thyroid cancer.

According to Dr. Martin Voss, a clinical director, and kidney cancer specialist at Memorial Sloan Kettering Cancer Center in New York City, the median survival for most patients taking combination treatments using immune checkpoint inhibitors is estimated to be 50 months or more.

“So that’s almost double what it was, and a much higher percentage of patients are able to achieve complete remission,” Dr. Voss said in an interview with Time.

But, there are side effects involved in combining targeted therapies and immune checkpoint inhibitors. Dr. McDermott estimates that roughly 1 in 10 patients stop treatment after experiencing side effects such as joint pain, gut dysfunction, and other debilitating symptoms. This rate doubles to 2 in 10 when a second immunotherapy is added. The side effects become more severe when patients take multiple immunotherapies.

“It really comes down to the philosophy of the appropriate goals of therapy,” Dr. McDermott said.

With cancer care, patients have a multidisciplinary team of doctors who create a comprehensive plan and goals for the patient’s overall treatment. For kidney cancer, this team may include a:

• Urologist A doctor who specializes in conditions that affect the urinary and genital organs.

• Urologic oncologist A urologist who specializes in treating cancers in the urinary tract.

• Medical oncologist A doctor trained to treat cancer with chemotherapy and other systemic treatments using medications.

Besides immune checkpoint inhibitors and targeted therapy, Cancer.net reports that:

• Doctors are testing the use of cancer vaccines to treat kidney cancer and prevent the recurrence of the disease for people with later-stage RCC. One test involves making a vaccine from a patient’s tumor and vaccinating the person after surgery. Other vaccines are made from proteins around and on the surface of kidney cancer cells or blood vessel cells found in the tumor.

Due to problems resulting from using certain drugs during treatment, Cancer.Net also reports that clinical trials are being conducted to find ways to reduce symptoms and side effects of current kidney cancer treatments to improve comfort and quality of life for patients.